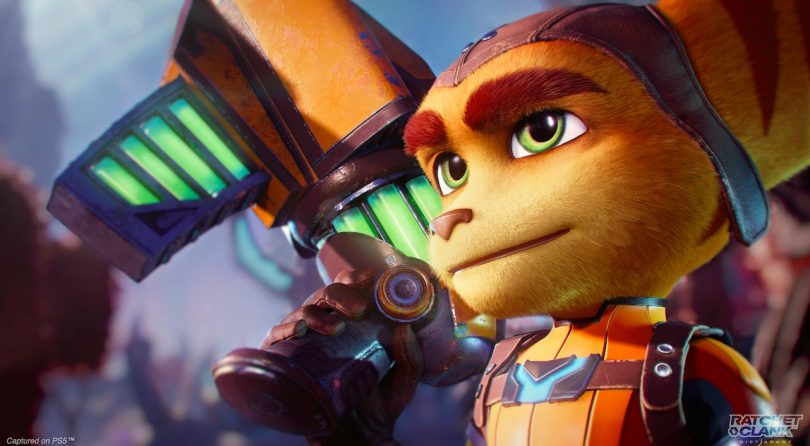 Rift Apart may be considered to be Playstation Studios’ first AAA mainstream PS5 exclusive, and Sony couldn’t have chosen a better existing IP to showcase the capabilities of the PS5. The PS5 biggest gun in its technical arsenal arguably is its custom SSD, and the much talked about speed benefits it offers. We’ve already seen the impressive load times in other titles – including Insomniac’s own Spider-man Miles Morales. Their latest title doesn’t disappoint in that department either. There are basically no load times in the entire game, except for the short transition scenes shown when you move to another planet. As may be clear from the title, Rift Apart’s key feature is its use of dimensional rifts – whether it’s to allow you to quickly move across battlefields, explore pocket dimensions and occasionally get dragged across different planets during boss fights. Again without experiencing any load times. It’s quite impressive to see your character fall through a rift during a boss fight onto a different planet – only for you to visit that exact location later on.

“Rivet is a breath of fresh air – she’s both similar and distinct enough from Ratchet to allow players to almost immediately form an emotional bond with her.” 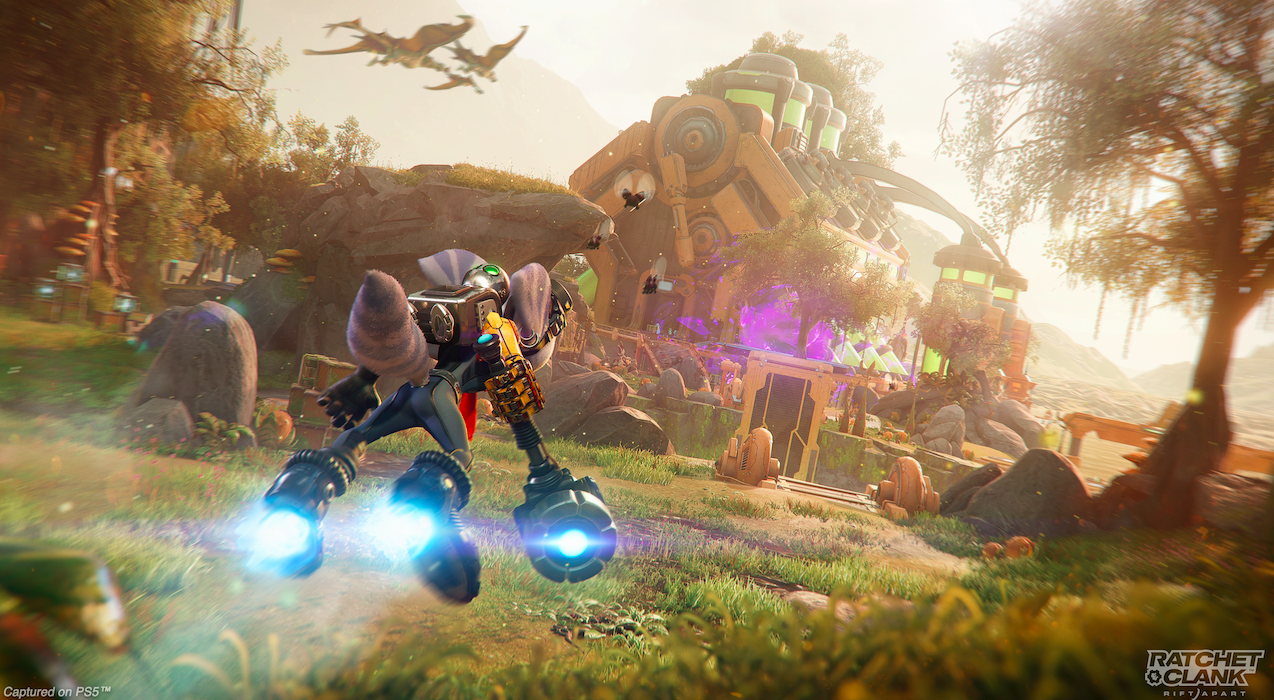 Interestingly, however – and what got fans probably most excited – is the new playable character Rivet – a female lombax who’s Ratchet’s counterpart from another dimension. As shown in promotional trailers Ratchet and Clank get “rift” apart early on due to a mishap with Dr. Nefarious and the rebuild dimensionator. While Ratchet is looking for Clank, the latter half of the normally otherwise inseparable duo gets somewhat forcibly teamed up with Rivet. And what do you know: taking these characters outside of their comfort zones by changing up the usual pairing turns out to be exactly what the franchise needed. Rivet is a breath of fresh air – she’s both similar and distinct enough from Ratchet to allow players to almost immediately form an emotional bond with her. Her dynamic with Clank is also refreshing in how different their rapport is. While functionally still acting like a living backpack, Clank has to build a relationship of trust with Rivet first. Predictably Rift Apart – with it taking place in an alternate dimension and all – introduces you to more new characters than just Rivet. I won’t spoil anything but rest assured, she’s not the only interesting new addition to the franchise’s already impressive ensemble.

Rivet certainly takes the spotlight, but she still shares it with Ratchet. In fact, you’ll regularly switch characters as you advance the plot – often giving you the choice to either first continue with your current character or switch to the other one. You don’t have full freedom to play the game as either character, though – as planets are restricted to either Rivet or Ratchet. You can only change characters by entering your spaceship and selecting a destination particular to that character. You can always replay a location for any missed golden bolts or other collectibles, though – sometimes you’re even encouraged to return to a previous area for new side content or for your next mission objective. From a gameplay perspective, there are no differences between Rivet and Ratchet – except for one using a hammer and the other a wrench. Even the absence of Clank doesn’t stop Ratchet from just using his boots to glide to a lower platform. The lombaxes also share their extensive arsenal of weapons and gadgets. Picking up a new weapon or gadget for one will make it instantly available to both.

I’m certain that the gameplay will mostly be familiar to Ratchet & Clank veterans, which consists of a mix of platforming, some light puzzling – the always fun Clank sections – and lots of gunplay. But of course, there are improvements and new additions to be expected from a new iteration in a long-running series. The most significant new upgrades are the phantom dash ability and the rift tether. It’s surprising how adding a simple dash ability improves the fluidity of the combat so much. Rather than just jumping or jump-rolling out of the way, you can now safely zoom past enemies and avoid enemy fire with the phantom dash. On top of its use in combat, you also use it to pass through force fields or get just that little bit of extra distance in the air when platforming. This upgrade also allows you to make use of Wall Run platforms – adding it to an assortment of familiar and new traversal mechanics, including your grapple hook and the newly added rift tether. The latter is used to open rifts – either to open pocket dimensions or pull yourself across a chasm, or just to get closer to your enemy. Pocket Dimensions function – unless the plot dictates otherwise – as bonus stages which offer particular traversal challenges, which in turn will reward you with a piece of gear when completed. Again it’s quite impressive how quick you can transition to an entirely different environment by entering these pocket dimensions without experiencing any load times.

“The Ratchet & Clank series focus on gunplay makes it the ideal candidate to showcase the DualSense unique features, and Insomniac makes ample use of them.” 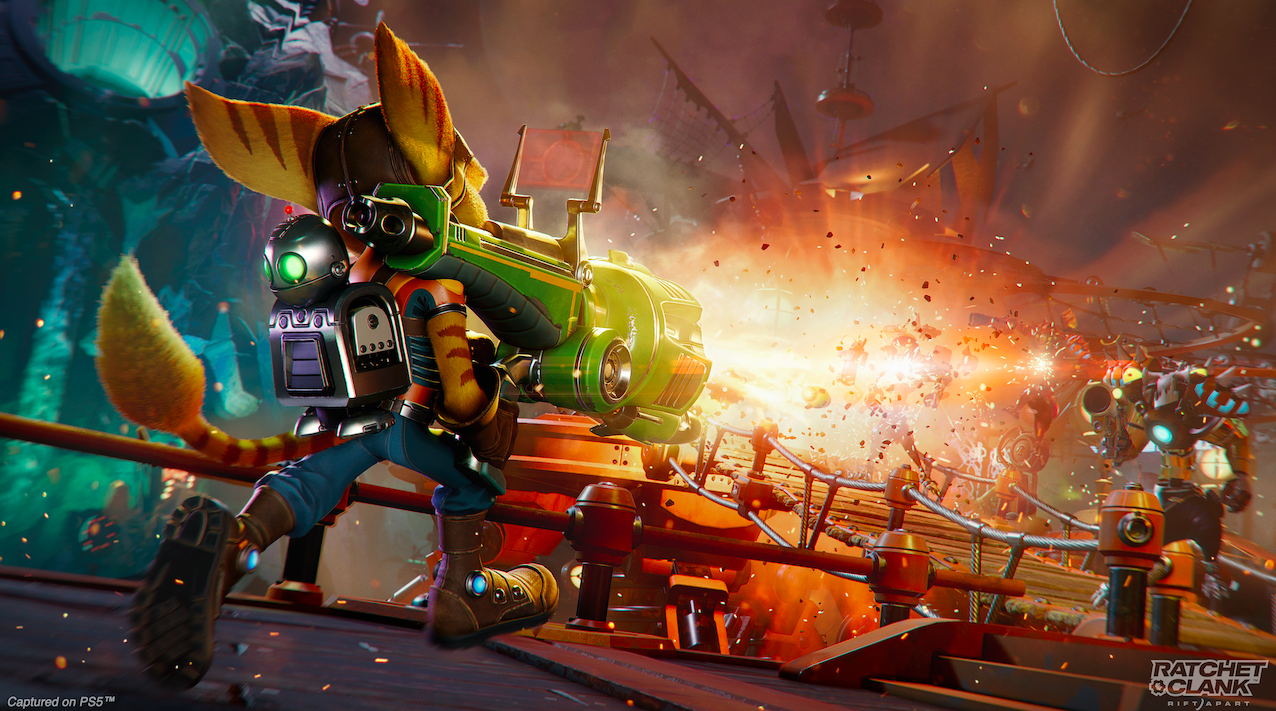 Of course, it wouldn’t be a Ratchet & Clank game without an arsenal of crazy weapons, and Rift Apart doesn’t disappoint here. Notable new additions are the Topiary Sprinkler – which turns your enemies into topiary – and the Ricochet – which keeps hitting your enemy using the rebound of its shots. There are more weapons to pick from, of course – including some old familiars. Using Ratchet and Rivet’s ever-increasing arsenal against a wide variety of enemies is satisfying as ever, but it’s the DualSense and its adaptive triggers that sets this sequel apart from its predecessors in this department. The Ratchet & Clank series focus on gunplay makes it the ideal candidate to showcase the DualSense unique features, and Insomniac makes ample use of them. Most weapons will have different fire modes depending on how far you press the trigger – for example, your pistol will fire single shots when pressed halfway but will switch to full auto mode when fully pressed. Weapons that are throwable – like grenades – will instead have you use the half-pressed trigger mode to set your throwing arc, while fully pressing it will simply throw the weapon. Overall this way of firing your weapons is quite intuitive, with only a short learning curve for some. It’s gameplay mechanics like these that remind you how the Playstation 5 is truly a next-gen console.

Ratchet & Clank games have – at least since the Playstation 3 – always been graphically impressive games. Not surprisingly, Rift Apart pushes that envelope even further. The game is drop-dead gorgeous to look at. Characters and environments never looked better. The level of detail is just staggering. Especially the environments with their amazing vista’s stand out – from the neon-futuristic cityscape of Nefarious city to the sprawling plains of Savali. Each locale has a unique look – sometimes even more than one due to dimensions shifting shenanigans – with level designs that make use of the Lombaxes’ ever-expanding set of tools and abilities. Some areas are heavily designed around grind rail sequences, while others include large open sandboxes to explore. Meanwhile, combat sections are beautifully chaotic, with explosions and brilliant particle effects everywhere. And without ever experiencing a performance drop. It’s too bad I couldn’t test the performance mode – since it comes with the day 1 patch – but even without it, the game runs incredibly smoothly. You can kind of see the influence the diverse set of Playstation studios have on each other. Even the cutscenes have a much more cinematic feel to it with Uncharted-like action sequences, and you can hear the influences of Insomniac’s own Spider-man in Rift Apart’s amazing score.

“The sheer amount of accessibility options is staggering.” 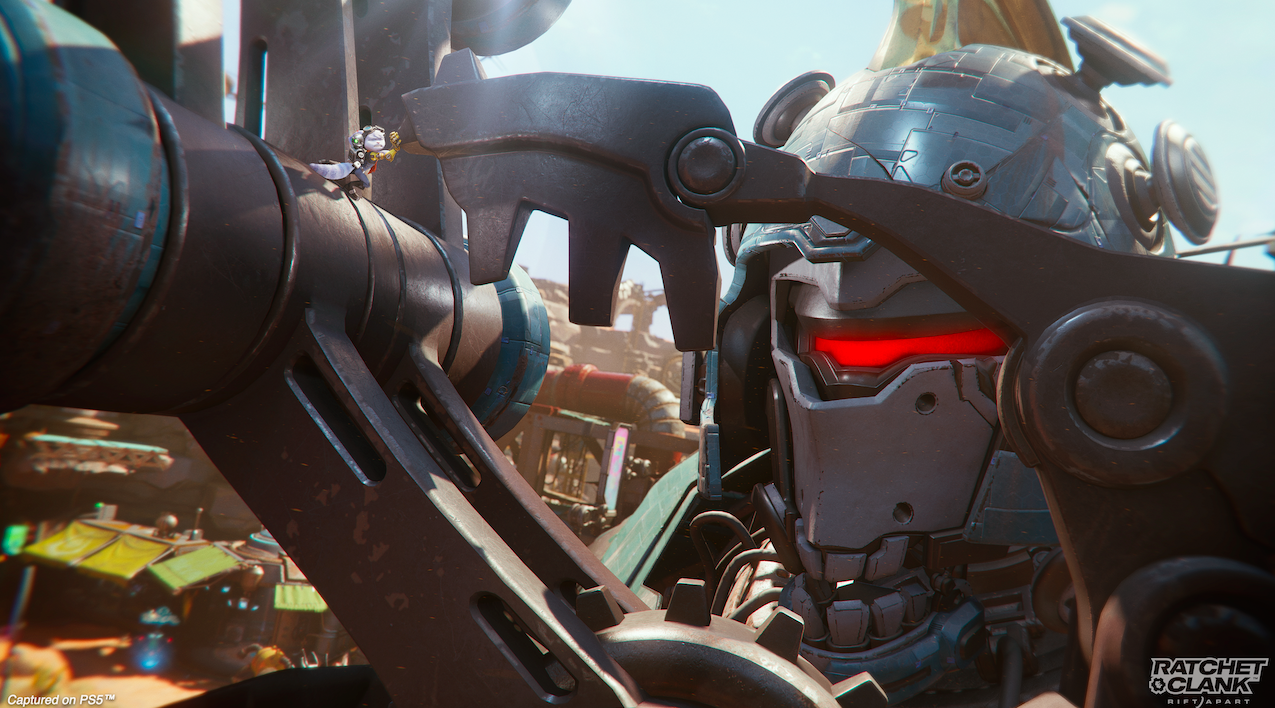 Last but certainly not least, I would like to highlight Rift Apart’s impressive slew of accessibility options. The Last of Us Part 2 – an excellent game by itself – stood out by the incredible width and depth of its accessibility options. It was a testament to the difference it makes if you include accessibility as part of your game design from the get-go instead of as an afterthought – as it, unfortunately, has been and still very much is the case.

I’m glad to see other Playstation studios have embraced Naughty Dog’s philosophy regarding accessibility, and I hope the trend becomes a firmly rooted game development principle followed by the industry at large. Rift Apart doesn’t disappoint in the least in this area. The sheer amount of accessibility options is staggering – even something simple like subtitles have multiple modifiers from size to color to opacity and more. Everything is also neatly sorted in relevant submenus. For example, the motions sickness menu allows you – amongst other things – to add a center dot on-screen or remove motion blur. Meanwhile, the visuals and contrast options menu allow you to set individual contrast shaders for the player character, enemies, collectibles, and so on. There are many more options – ranging from changing the color of the throwing arc to changing button presses from hold to tap. You can even set shortcuts to specific buttons for certain accessibility options, such as reducing the game speed. Gaming Route’s Ankit Gaba wrote an extensive piece about accessibility in gaming for those of you who are interested in reading more click here
The day one patch even added more accessibility options including Directional Button Movement, Melee Mode Toggle Update, Camera Follow, Grind Assist, Mono Audio, Hit Confirm Volume and Aim Sensitivity.

“Ratchet & Clank: Rift Apart is an incredible audiovisual experience, ridiculously fun and a perfect showcase of the Playstation 5’s capabilities.” 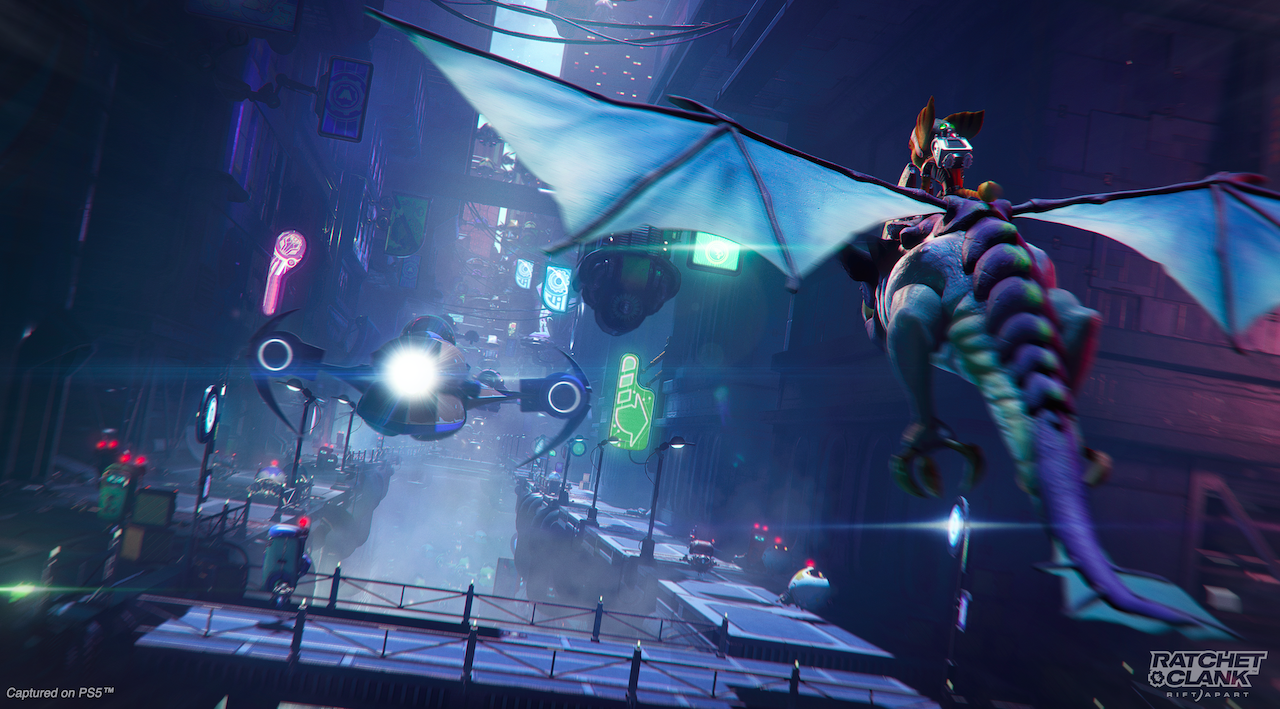 Rift Apart was a blast. Any fan of the franchise will not be disappointed, but even newcomers will find much to enjoy. Since the series has never really been plot-heavy – except A Crack in Time perhaps – and with a new playable character in the form of Rivet, this is the perfect entry point for the uninitiated. The game is an incredible audiovisual experience, ridiculously fun and a perfect showcase of the Playstation 5’s capabilities. Since the Day 1 patch wasn’t available at the time of this review, I did experience a few bugs, such as crashes or the game not registering objective completions correctly. None were game-breaking, though, and I expect the patch to resolve most – if not all – of them. On a personal level, I did miss some of the more iconic weapons, and perhaps I wanted a bit more of the story as it didn’t quite reach the dramatic highs of A Crack in Time’s story, but you can’t have it all I guess. If there’s any game out there justifying the purchase of a Playstation 5, then it’s Ratchet & Clank: Rift Apart.