Game of the year, Mighty Goose most definitely is not. But what it is, is a blast of fun. 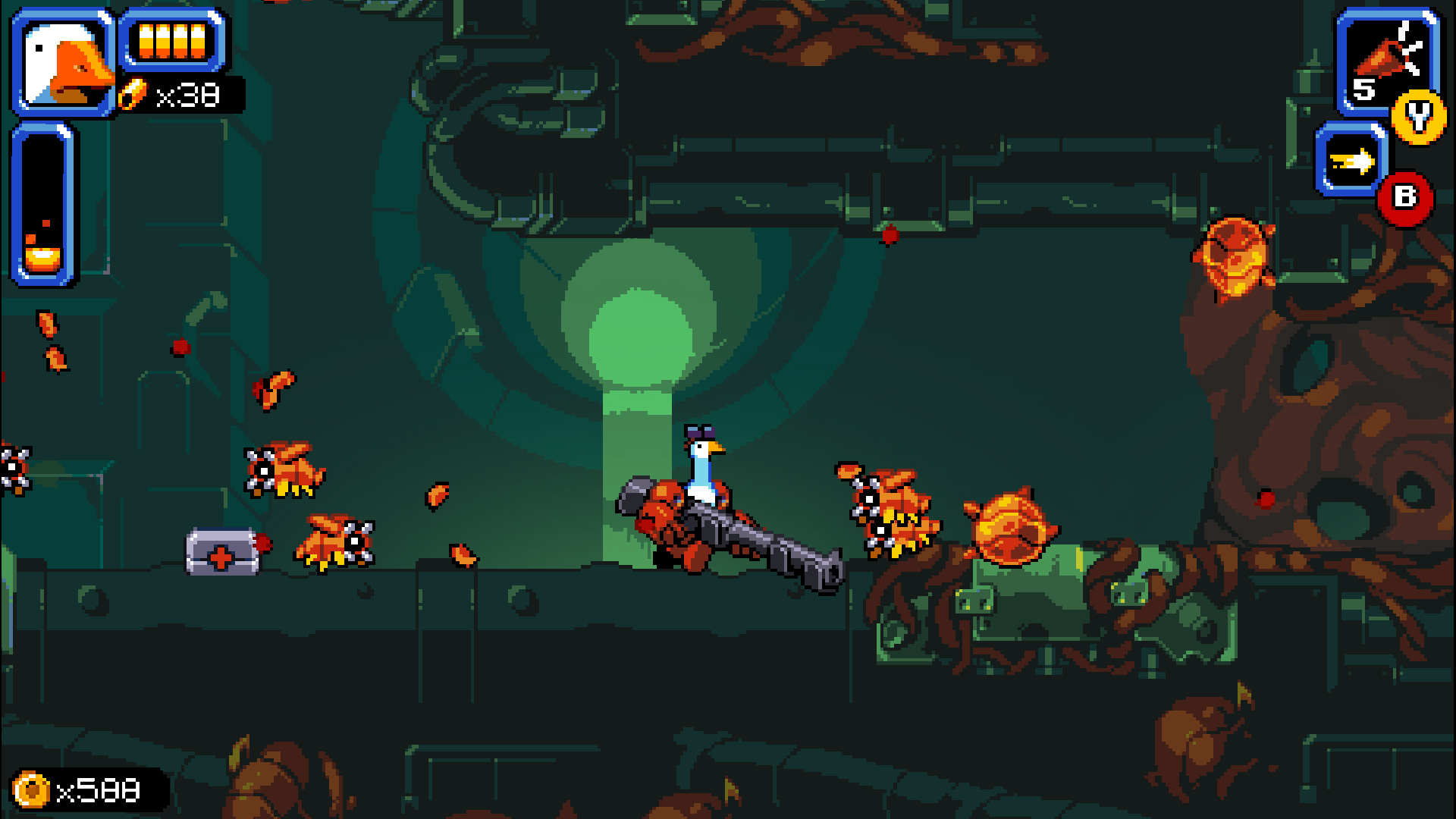 The graphical presentation presents a unique retro style that manages to bring together different types of character and enemy designs that pop out and feel unique. Each new encounter is intense and exciting, made even more so by the soundtrack. The audio and music help elevate the retro vibe of the experience, with a fantastic score courtesy of Dominic Ninmark. The quality of the audio gives it an authentic and enticing feel, with guns having individual sounds when fired that remains consistent throughout. Despite this, there are occasions during intense battles where one can lose track of their own character and thus get killed, where the highly inconsistent and unforgiving checkpoint system comes in.

Quality of Life and Difficulty

The game has no difficulty level, and thus, it shifts between being somewhat easy and manageable and being painfully difficult. The controls on the keyboard take some getting used to, and it took me roughly 3 or 4 levels before I was able to have a steady hand with it, and the lack of a tutorial does not help in this regard. Some of the boss battles have simple and easy to memorize patterns, while others, in particular the second, are brutally hard as the game fully embraces the bullet hell part of its conception. The inconsistent difficulty level and subsequent spikes turn the game into a slog, and the aforementioned poor checkpoint system does nothing to help in that regard, with it being occasionally perfectly timed, but more often being incredibly frustrating, and at multiple points, sent me back to the beginning of the level. Multiple times, I was close to defeating the final boss in its final phase, yet I died and had to restart from the beginning.

Since the story is the least important aspect, I’ll lump it in with the most crucial part. The story is nothing to write home about, with the most interesting thing being the premise of a bounty hunter goose, and the rest is just a bunch of serviceable details meant to have the player explore different areas. The gameplay at its peak is where the game truly comes into its own, with a limited yet engaging arsenal to use against the different enemy types that the player encounters. There are enough enemies for it to be challenging, yet not so much that it becomes too difficult to keep track, the rare case in which the difficulty is neither easy nor ramped up all the way to 11. Lots of times, it can take trial and error to figure out the weaknesses, and while on occasion, it can be frustrating, particularly in the boss sections, the respawn time is quick enough, and the combat is so intense that one cannot mind the occasional death to find ways to make it past an encounter. Each new enemy presented a new puzzle, with some of the aforementioned weaknesses being clear and some being tough yet still always being balanced. There was, however, an instance where I had to use something that I was not aware was required, and not knowing this cost me a life or two. Despite the occasional aforementioned difficulty spike, the game grants enough opportunities to bounce back and regain momentum and rarely ever feels unfair. It never seems to overstay its welcome, with a short length that almost never drags.

After completing the game, there is a New Game Plus mode, and things are much easier thanks to the increased experience of the player, despite still being surprisingly tough in many areas. There aren’t many differences to its detriment, and there really isn’t much to do in this mode that hasn’t been done before save for experimenting with load-outs potentially. 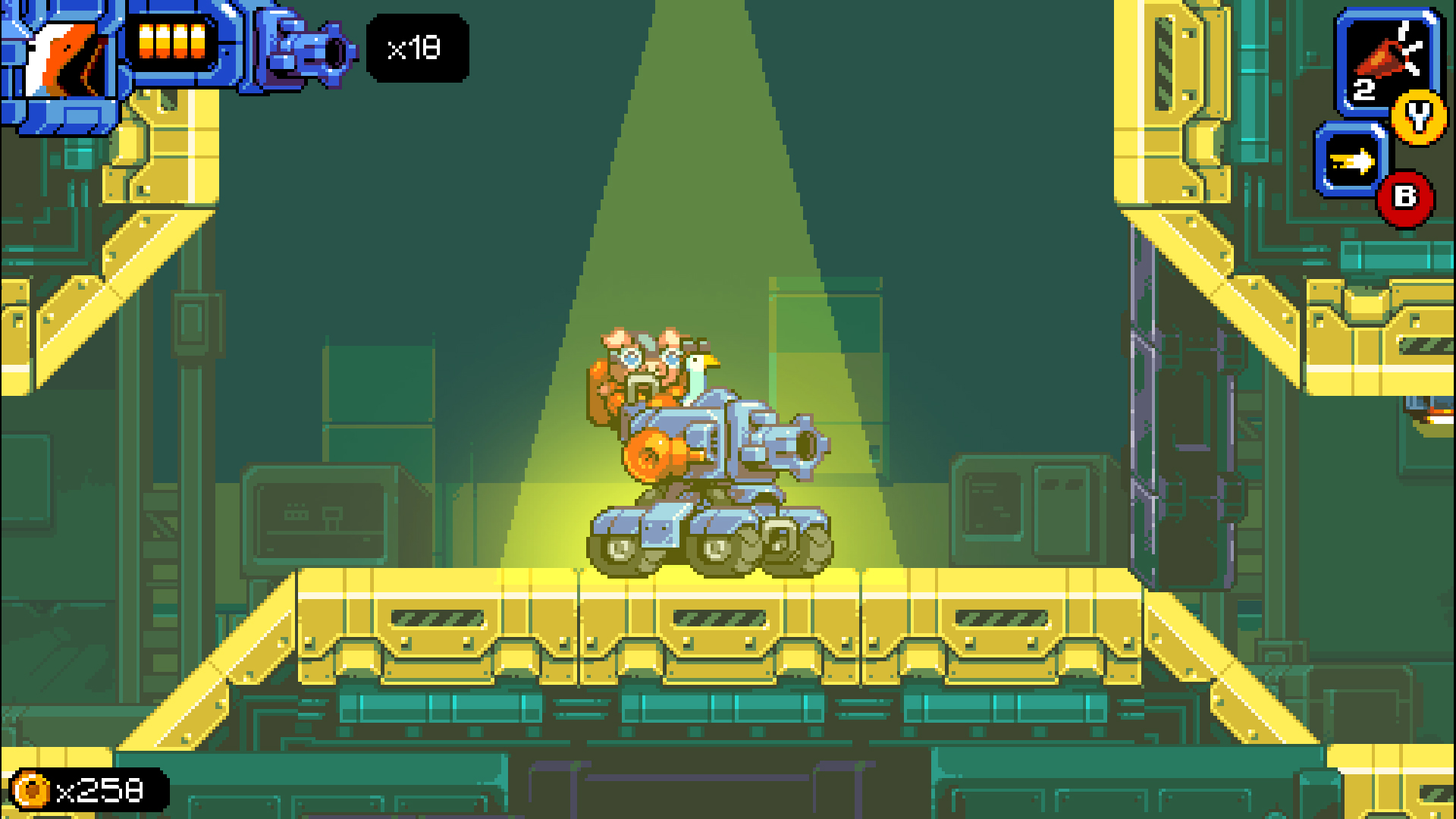 Mighty Goose is one of those odd games that presents a wacky premise yet doesn’t go too crazy with it. While there’s a lot to love in the music, art style and gameplay, it’s held back by many issues that make it far too frustrating and unfair, along with lacking a tutorial, and despite not lasting too long, it also doesn’t leave a lasting impression.

What do you think about this review? Please let us know in the comments below, and for more reviews, click here