Platforms: PlayStation 4, Xbox One, and PC
Platform Reviewed On: PS4

Kingdoms of Amalur Re-Reckoning is a fantastic game with one of the best combat systems I have seen in an RPG so far. It also has a great art style that is filled with forests and different types of locations, which are very pleasant to look at overall; it’s a great experience, but it also has some issues like the frame rate drops, rendering issues, and mediocre Story. Kingdoms Amalur Re-Reckoning does have these issues, but the reason I kept playing the game was because of the fantastic gameplay. I would have stopped playing it after about 10 hours if it wasn’t for the gameplay. There are multiple difficulties, but playing on very hard doesn’t change the experience that much because playing on more formidable difficulties increases the health bar of enemies.

Kingdoms Amalur’s character animations during cutscenes were also very bad the characters don’t express any emotions at all, but at least they gave us a skip button. Even those who played the original might know this the main character doesn’t have a voice; there are multiple dialogue options which were impressive; also, the character customization is excellent; you can either play as a female or a male and in the genders, thereare classes of people after choosing the gender. 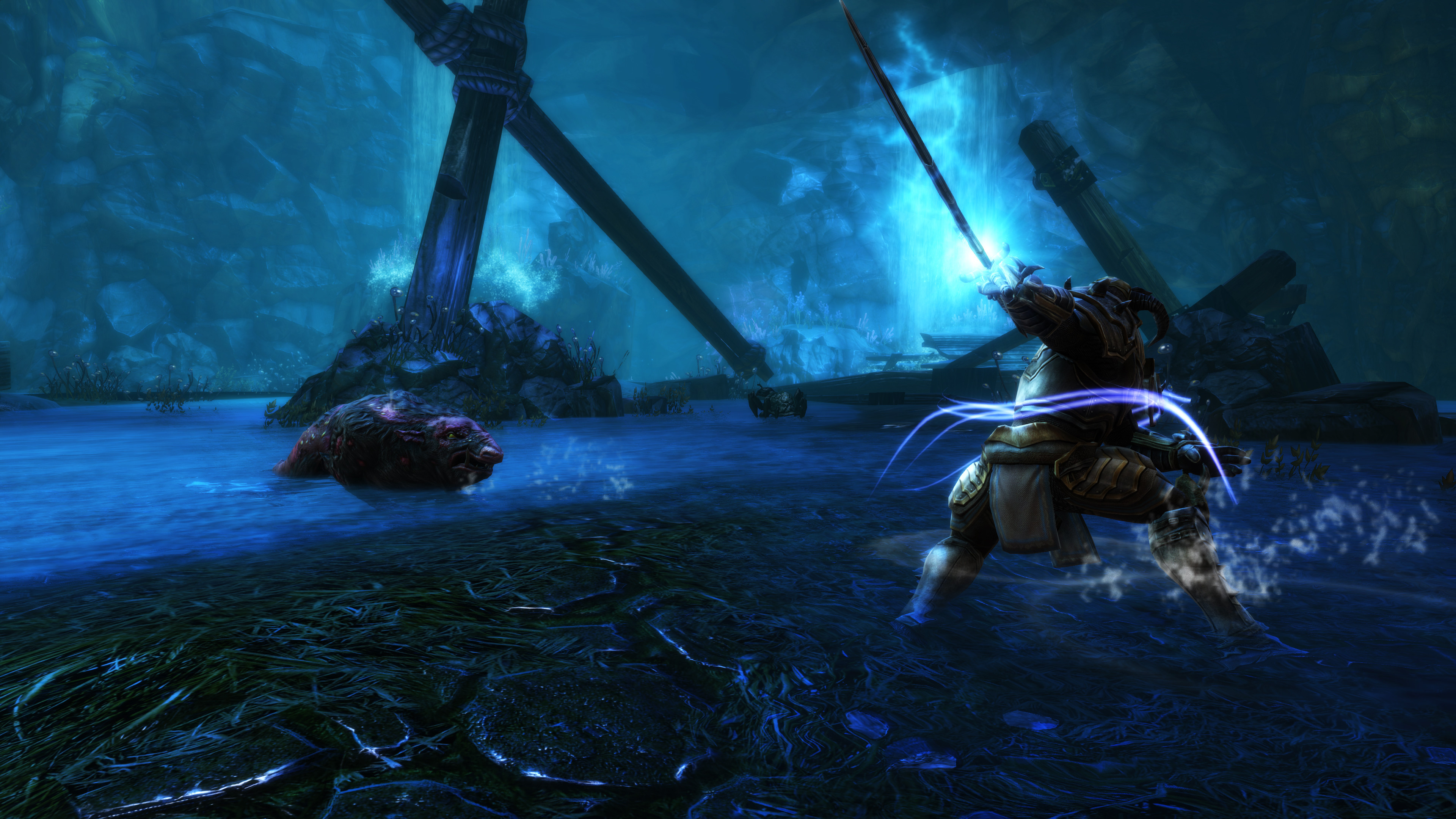 THQ Nordic and developers Big Huge Games have added many changes to Re-Reckoning in terms of gameplay. It’s very different from the original in terms of many things. First of all, they added a new difficulty, which is called “Very Hard.” They have also removed the level lock (The original game determined the level of a zone on first entering; this was stored in the save file. In Re-Reckoning, we re-calculate the level every time entering or re-entering a level) THQ Nordic has also added a New zone Level calculation system.

Inventory management in the Kingdoms of Amalur is straightforward too. You can add the items you don’t need to junk and destroy or sell them.

Changes from the original version: 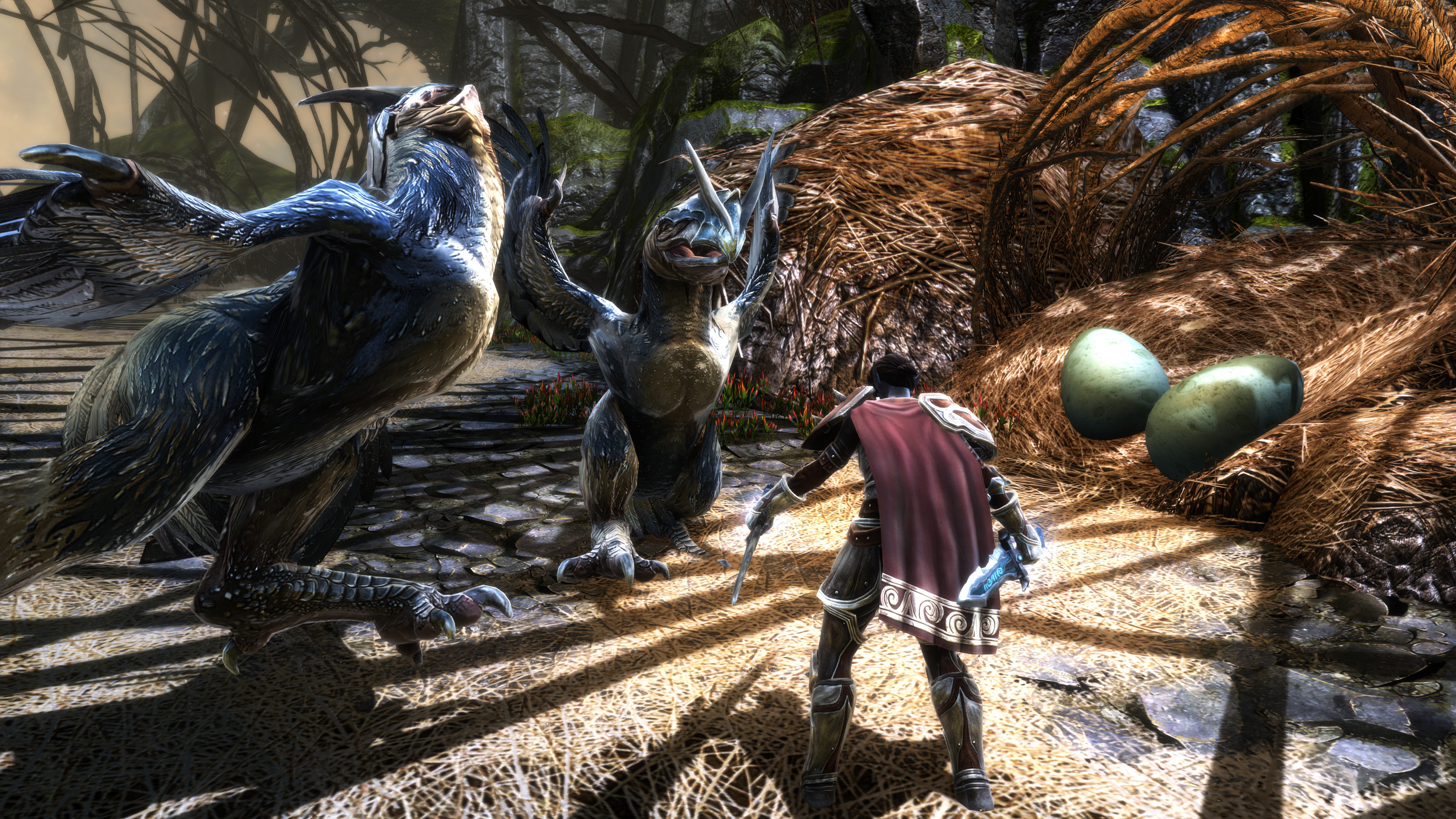 The original game has all zones marked with a minimum and maximum level. Upon entering, the current player level was clamped into this minimum / full range and stored as level. THQ Nordic has used the current difficulty level as a means to determine the level before clamping into the minimum / maximum range. On Casual difficulty, the player level is reduced a bit; on hard and very hard, it is increased. They also increase the maximum values for hard and very hard difficulty. The XP gain has been reduced to cater to the increased level of enemies, and THQ Nordic made sure that XP IS not increased when playing on harder difficulties due to the effect of beating higher eve’ enemies. The result is that you can still out-level zones – which is desirable if it doesn’t happen too quickly. It is part of the power fantasy to be able to come back to initial zones and be overpowered. They also made the zone Level calculation easier to modify by modders. Loot level lock of Containers removed Loot containers now only store their generated loot when they are opened. At the same time, before, they used to store it when entering a zone and were generated to the current player level.

In Re-Reckoning, loot generation rules are altered so that you will more often get items that fit your characters’ skillset. Loot is mostly randomly generated, but THQ Nordic increased the weights of loot that matches the player’s skill lineup better, and THQ Nordic has a virtual counter that increases the chance of better loot drops when you didn’t find anything good.

Now let’s talk about the best part of the Kingdoms of Amalur. 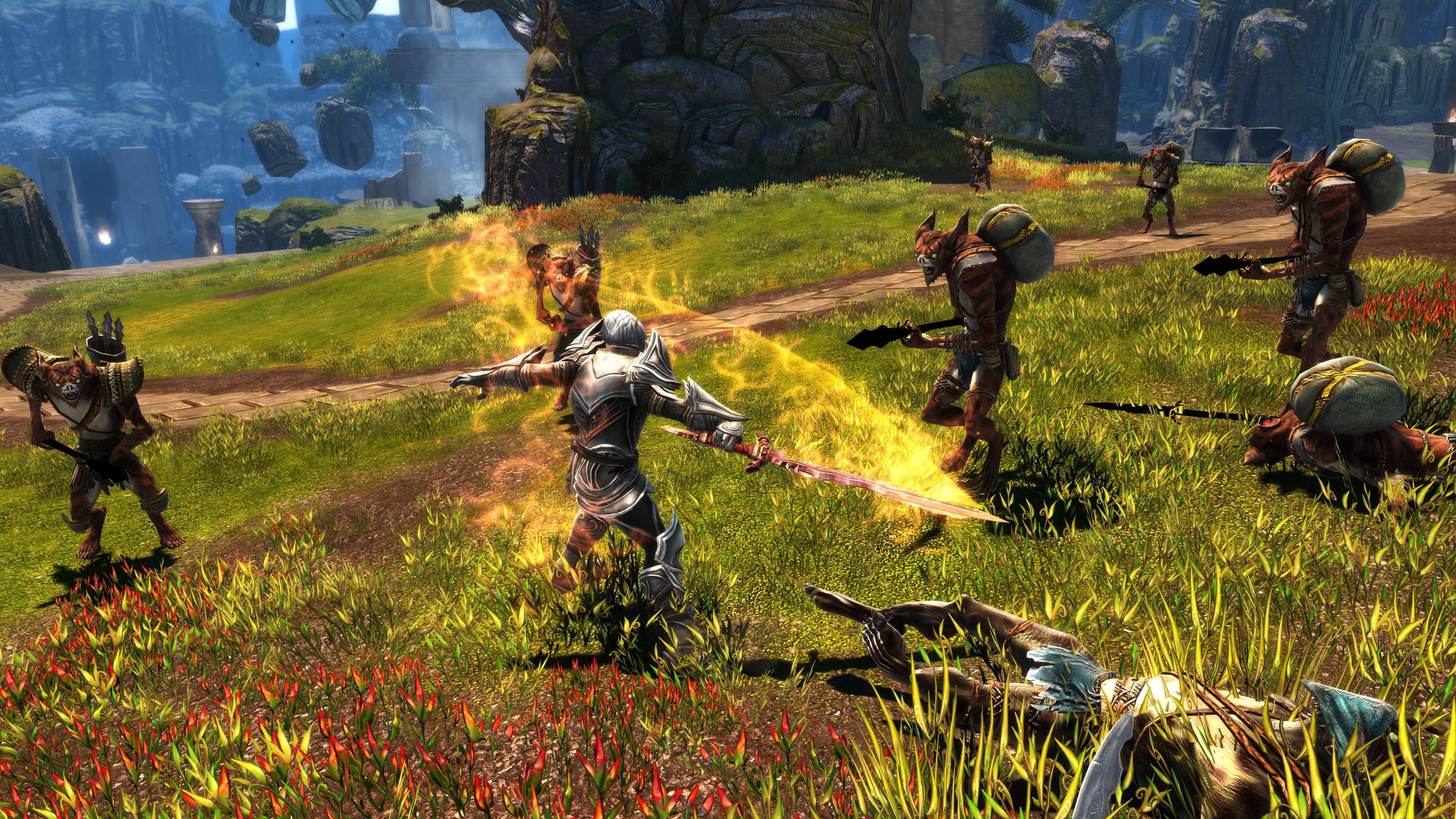 As I mentioned before, the combat system is one of the best in the RPG Genre. There are multiple types of weapons that feel totally different ranged combat is great too. I mostly used a staff that allowed me to burn my enemies to death. There’s a reckoning mode too, which kind of reminded me of rage mode from God of War games you are able to kill your enemies quicker, and in the ending of that, there’s a fatality filled with some brutal stuff. There is magic in the combat of Kingdoms Amalur, too, which wasn’t very useful, at least to me. Also, Combat System is very easy to master, and getting the best weapons is easy because of the progression system. I mostly used Chakarams, Staves, and Greatsword. You can play Kingdoms Amalur with two weapons at once Primary and Secondary. Potions are really useful in combat since there is no other way to increase your health unless you level up.

Fighting giant beasts in the Kingdoms of Amalur was the best part. It reminded me a lot of God of War 3 for some reason because it had amazing brutal boss fights like that.

You can also parry your enemies’ attack with a shield; as I mentioned before, the combat is pretty easy to master. It’s the long health bars that make the game hard and challenging most of the time. There’s also a virtual currency that you can use to buy new weapons. There are many different types of weapons with unique abilities and a different fighting style. The weapons types you can choose from are Chakarms, Long Swords, Great Swords, Hammars, Fae Blades, Staves, Daggers, Long Bows, and Sceptres. You can use two weapons at once, one as your primary and one as your secondary. You can also use the virtual currency to buy better armor, potions, which will help you to get your health or mana back.

The Story of Kingdoms of Amalur was basically about Destiny and Fate. It didn’t appeal to me that much, but it got interesting at several points. There are three types of quests in Kingdoms of Amalur quests, factions, and tasks; they have also added the Teeth of Naros DLC and The Legend of Dead Kel DLC in Re-Reckoning. Kingdoms of Amalur Re-Reckoning will also receive a brand new DLC in 2021. Thanks to THQ Nordic for reviving this amazing game.

As I don’t want to spoil the Story, let’s talk about the flaws instead now. 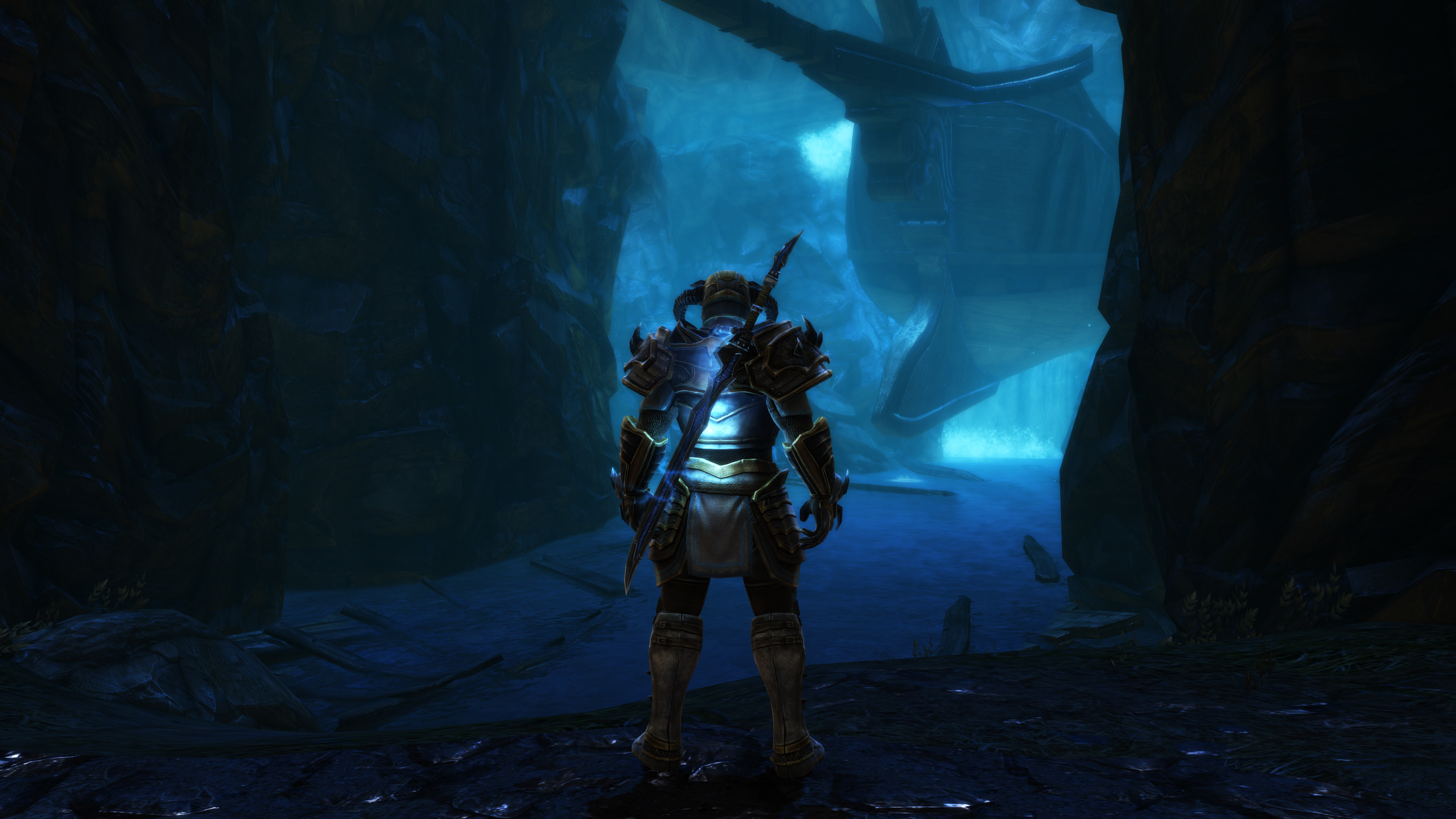 Kingdoms of Amalur Re-Reckoning suffers from Frame Rate Drops and Rendering issues. Frame Rate Drops occasionally happen when you travel to another area. I was playing on PlayStation 4 Slim, so these issues might or might not occur to you. Rendering issues were pretty annoying because the enemies would pop out of nowhere. They are invisible for a while; then, the textures appear on the enemies when they get closer to you and attack you. It is a very weird glitch. There is another rendering issue where textures on the ground pop up, but that wasn’t as bothering as the enemy rendering issue. An Issue I had later in the game was that the enemies would change their color like their texture would disappear, and they would turn blue, red, and yellow. They would switch their colors very often

Hopefully, the developers will fix these issues in upcoming patches so you won’t have to experience these bugs. Another issue I had was that the dungeons were too dark, and you couldn’t see anything properly, but the developers fixed it later.

Loading Screens were very long while traveling through different areas; somehow, the fast travel loading screens were shorter than that; hopefully, the next generation consoles won’t have this issue. 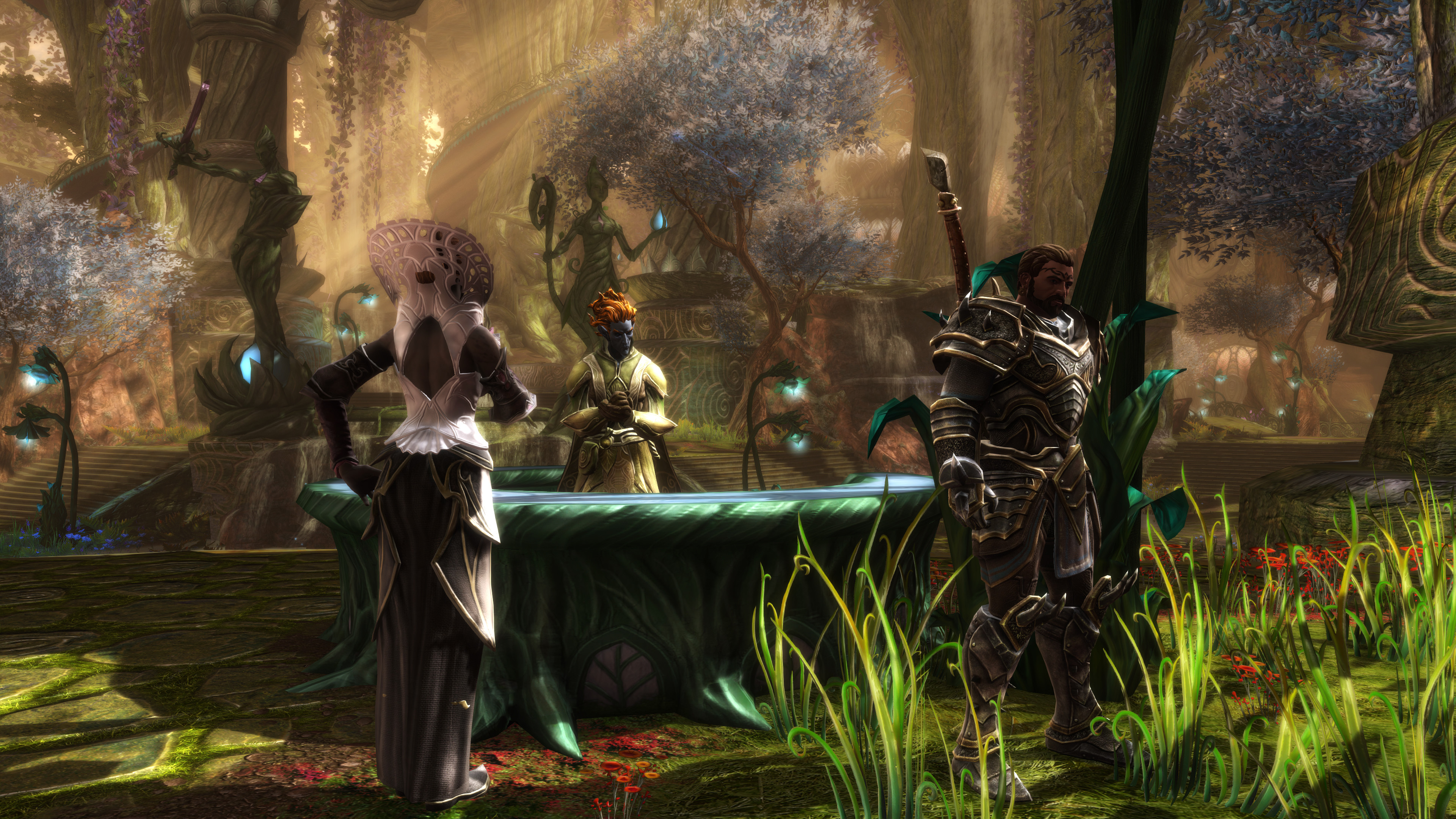 Kingdom Amalur is a great game ruined by technical issues and a boring story. If it weren’t for the amazing gameplay, I would have dropped this game just like I mentioned at the beginning of the review. If these technical issues get fixed, the experience would be much better for those of you who will be playing Kingdoms of Amalur Re-Reckoning; hopefully, the developers try to patch these issues as soon as possible. Kingdoms of Amalur’s Combat was top tier burning through enemies with staves was fun, and chakrams were very useful in ranged combat, and I had the chakrams with fire ability so they would burn the enemies while killing them. There are multiple types of quests: Side Quests, Main Quests, and Factions. Side missions are given to you by NPCs that have exclamation sign in the minimap