Written by Marshall B

Nostalgia is a hell of a drug. When I learned of an Alex Kidd remake, I jumped at the opportunity to play it again. While I grew up with the Nintendo NES, I still fondly remember playing Alexx Kidd on my relatives’ master system (or was it master systems II?). Being a kid myself at the time, I was amazed by the simple fact the game was built into the console itself – no cartridge required. While I never finished the game back then, I do recall the wacky rock-paper-scissor boss fights. Yet that youthful remembrance can’t do anything against my disappointment when I finally got my hands on this remake. 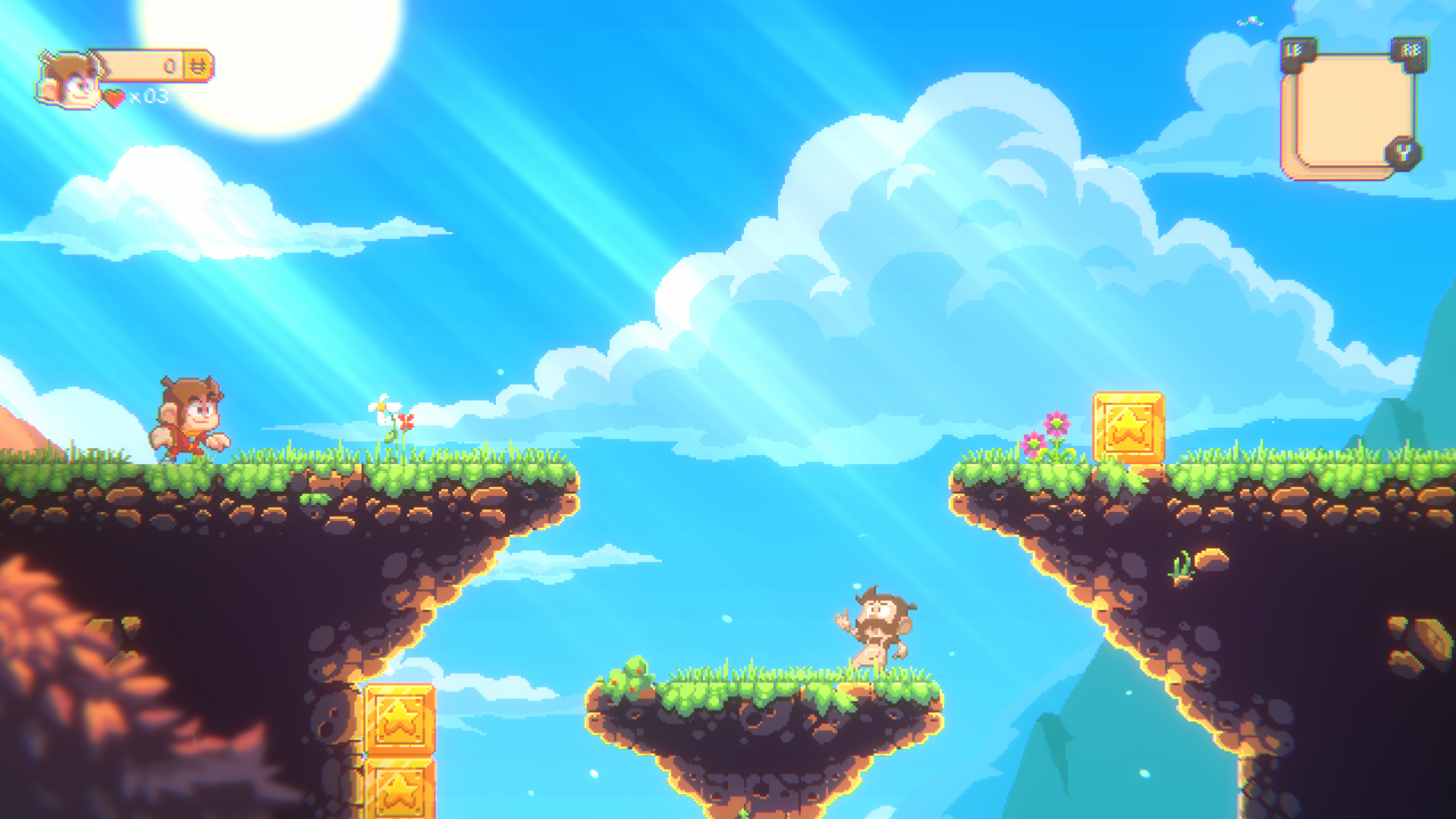 To be fair, Alex Kidd in Miracle World DX isn’t a lazy remaster or remake by any extent. The new 2D graphics look great when comparing it to the original – really making it look like a playable cartoon. The entire soundtrack has been reimagined as well to great success – though admittedly, I do have a preference for the original 8-bit soundtrack, I can’t deny the new versions are done well. Additionally, there are some changes – like new NPCs – and improvements made to this version. In particular, the quick switch UI that allows you to quickly cycle through consumable items you picked up without having to pause the game and no longer having to start the game over when you lose all your lives – rather, you just have to start over the current level – are a welcome addition. You can also unlock a boss rush mode and classic mode for additional replayability. But the most interesting new feature is one that’s only possible with a remake, namely the ability to instantly switch between the classic 8-bit graphics and the new graphics. It’s a great way to showcase how great the new version looks if you can compare it on the fly with the original. I found myself often switching back and forth to see how a particular enemy or level looked like before – and of course, to occasionally enjoy the old school tunes. Mind you, there is a slight delay, so be careful not to do it when you’re in a hectic boss fight, or you may lose a life.

The game is frustratingly difficult, however, even without the possibility of a game over screen forcing you to start the entire game over. Especially the more labyrinthian castle levels can be a pain to have to start over when you run out of lives. The original game design didn’t entirely keep up with this change, however. Shops – where you can spend the money you collected on convenient items like helicopters or rings that turn your regular attacks into ranged ones -can often be found at the beginning of levels, yet if you lose all your lives, you will start the level penniless. And since you can’t move back once the screen scrolls to the right, these shops become useless if you didn’t directly get there from a previous level. Not the biggest deal – certainly – but still a thing to note as remakes often tend to make small changes that have larger consequences. You do have the option to turn on infinite lives – which removes at least part of the frustration as you avoid the risk of having to start the level over, but it voids trophies, so it does come at a cost. Still, it may be inevitable that you hit a point where you will forgo the honour of completing the game the hard way in favour of actually getting to see the ending any time soon. 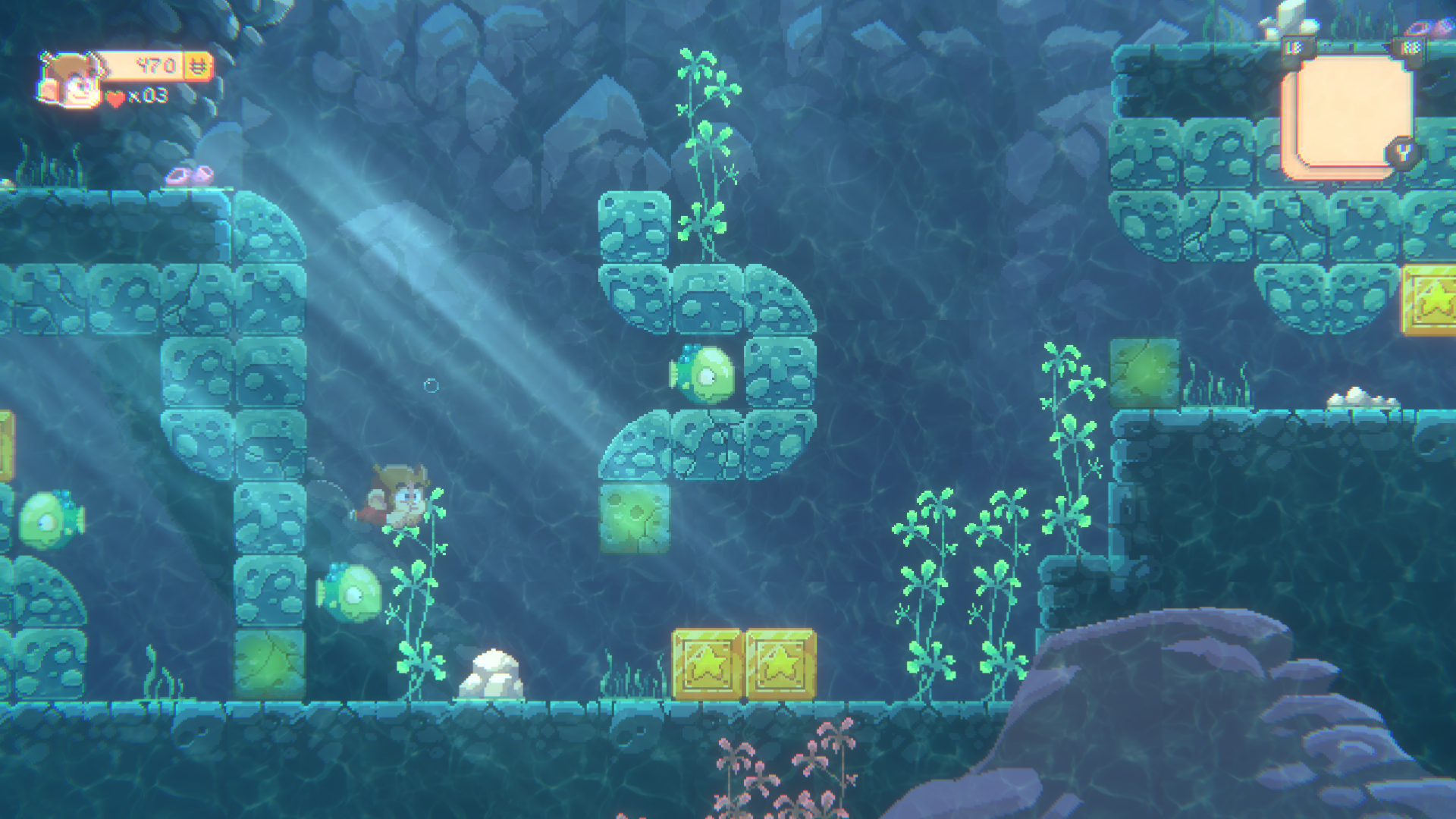 The difficulty of the game is mostly inherent to the original, and there’s certainly an argument to be made that a remake shouldn’t change too much in terms of how the game actually plays for the sake of authenticity – one might even say it’s part of the charm. But it’s also fair to expect more of a remake than just a new coat of paint and a few extras. In particular, if that difficulty mostly stems from the game’s awful controls. They are way too floaty for the precision the game often asks of you. If not hitting a platform just right means falling to your demise or even breathing on an enemy means losing a life, then the least you can expect is the controls to be a little tighter than this. This is one area where the remake could’ve made a significant change that would greatly affect the game’s enjoyability. Unfortunately, the developers chose differently and, to make matters worse, even made the game more frustrating – albeit unintentionally. The new item quick-switch UI is great on paper, but unfortunately, its placement on the screen also tends to obscure enemies and even switches. A rather unfortunate oversight indeed. Furthermore, while I certainly can appreciate the extent they went to update the game’s art design, it won’t do if you overindulge yourself to the point that it actually makes things more challenging for players. The original level design was largely devoid of actual backgrounds, while this remake improves upon this by adding beautifully drawn landscapes in its place. Yet why they made the choice to go for brightly colored flames or fog effects, when bosses and regular enemies have a tendency of throwing barely visible projectiles, to begin with, is something I will never stop wondering about. These well-intended changes hamper an already frustrating game even further, and that’s the last thing you want with a remake. 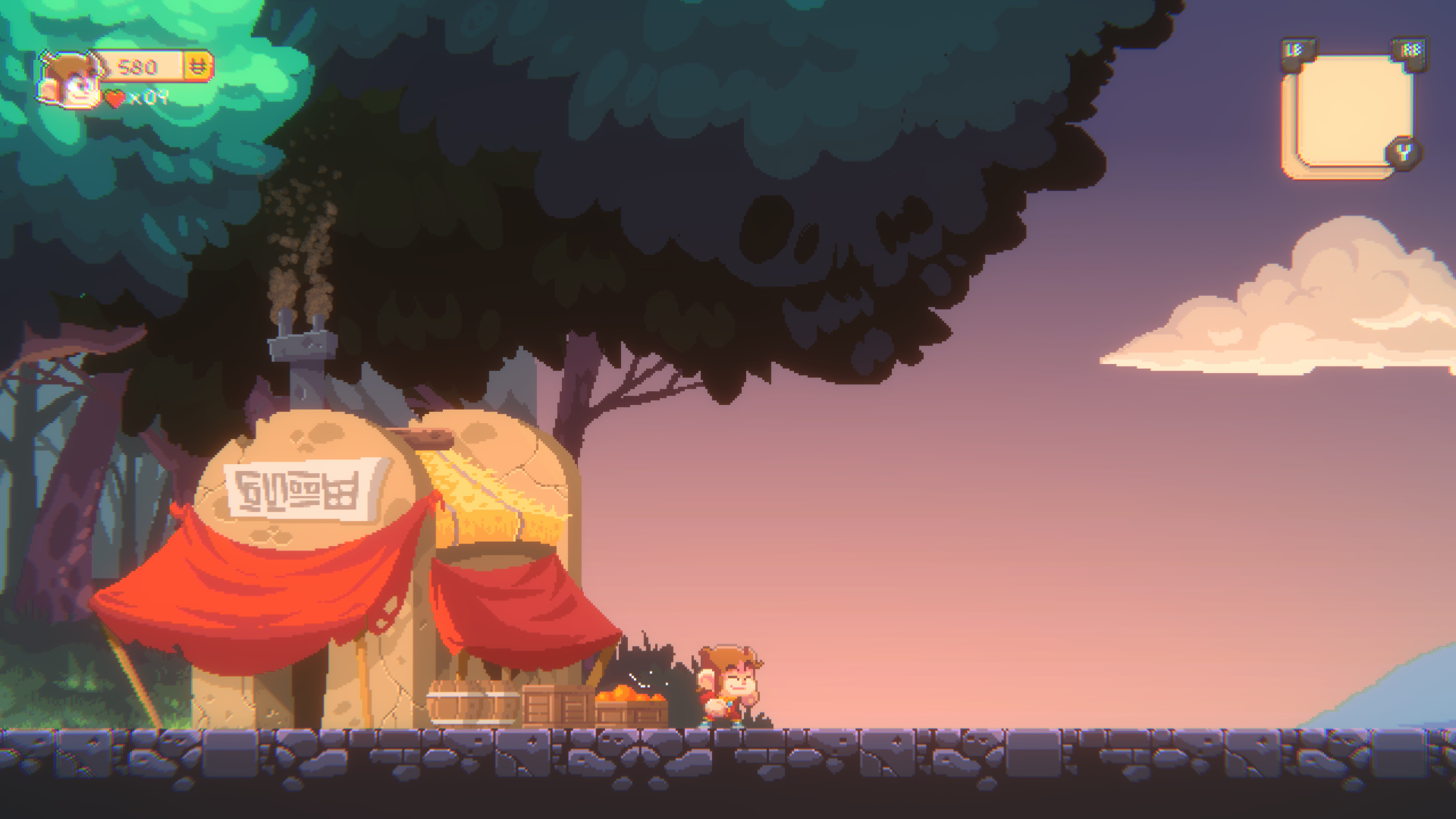 Alex Kidd in Miracle World DX is a well-intended but, unfortunately disappointing remake of a game that already suffered from frustrating game design and controls. The improvements and extras added to this version can’t overcome the shortcomings of the original – and certain baffling choices on behalf of the remake team even compound on those shortcomings, resulting in an even more frustrating experience. I wish I could’ve enjoyed this game more, but that would’ve taken more fundamental changes – especially to the gameplay – than the developers were willing to take.If you’re a fan of the original, you may find some enjoyment from this version, but for most, this will just be a (short – let’s face is it the game isn’t exactly long) cycle of frustration and missed opportunities.